They were accompanied by several other government officials, including ELM Municipal Manager (MM) Oupa Nkoane and Members of the Mayoral Committee (MMCs).

Following a briefing held at the council chambers of Sedibeng District Municipality in Vereeniging, Minister Sisulu and all government leaders undertook a tour of the sites where the VRIP was hard at work unblocking sewer spillages in and around ELM.

At the one of the sites on Frikkie Meyer Boulevard in Vanderbijlpark, Minister Sisulu witnessed the unblocking of a sewer line, which had caused massive spillages in the area.

Later in the day, the minister and the entire government delegation held meetings with communities, employees of the municipality and fellow stakeholders in the project.

She said the VRIP remains government’s top priority as it hinders the development of new human settlements in ELM and surrounding areas.

“One of the issues I’m looking at is considering whether or not it is possible to declare this area as a disaster area after consultation with the relevant ministry as this will unlock some of the potential that is possible for us,” she said.

Sisulu commended ELM communities for cooperating with all stakeholders in the project.

MEC Maile said unspent financial resources will be re-prioritized to expedite the completion of the VRIP.

“This project is important for the economy of the province and country,” he said.

Mayor Moerane reiterated that council has approved ERWAT to work on the municipality’s infrastructure.

“All Emfuleni’s 45 wards should benefit from this project,” said the Mayor, warning communities against stopping projects.

Councillor Moerane promised to undertake Mayoral Imbizos to engage communities on service delivery matters, including progress made in the VRIP.

MM Nkoane told Minister Sisulu that the priority for ELM was to fill vacant posts in the municipality’s water division, Metsi-A-Lekoa.

ERWAT Managing Director Tumelo Gopane and Gauteng Department of Water and Sanitation Provincial Head Sibusiso Mthembu were also part of the proceedings.
The VRIP is aimed at curbing sewer spillages in residential areas in ELM and into the (VRS).

Led by the Ekurhuleni Water Care Company (ERWAT), as implementing agents, the VRIP boasts many other stakeholders including ELM, the national department of Human Settlements, Water and Sanitation, Gauteng CoGTA and the Municipal Infrastructure Support Agent (MISA).

It is estimated the project will run for three years with an initial budget of R1-billion required. 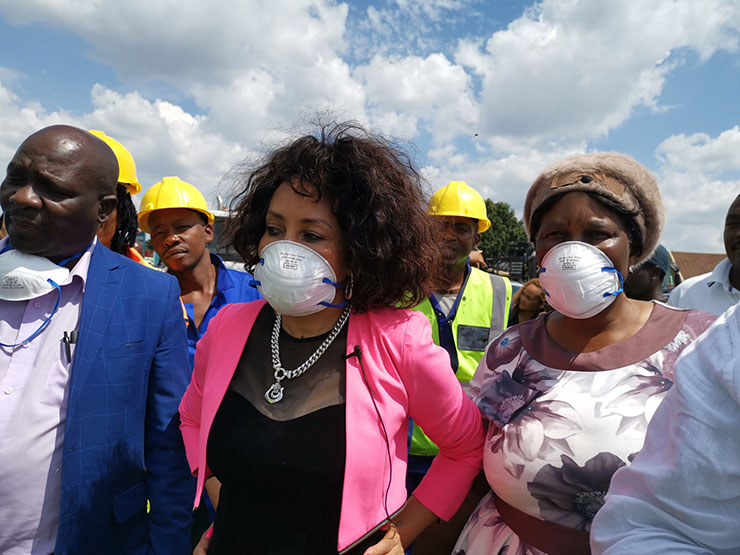 Human Settlements and Water and Sanitation Minister Lindiwe Sisulu is flanked by ELM Basic Services MMC Bheki Ntsele and Chief Whip Christina Sale during one of the site visits.